Please note: Advertised listings may be subject to change at short notice so please check before travelling

Whether you’re a Goth, metal-head, traditional post-Punker, New Wave or eighties fanatic, we'd like to think that the Albany Club has something for everybody. We're raising our game in 2017 with a regular programme of midweek events squarely aimed at the alternative scene.

Spread the word! The most valuable way to support your our alternative scene is to let other people know it exists. The more people that attend events, the more events there will be! Spreading the word could be as simple as sharing our Facebook page! 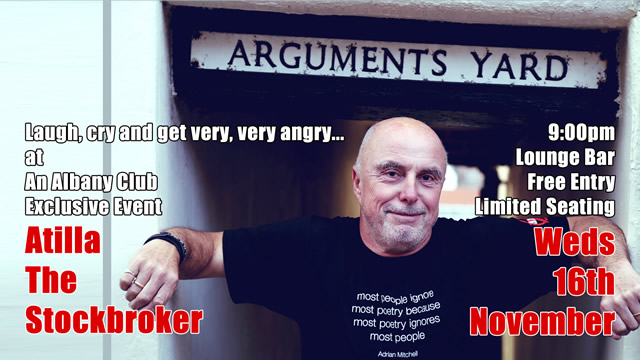 Punk poet and raconteur Attila the Stockbroker performed to a packed room at the Albany Club. Attila (aka John Baine) is a punk poet, and a folk punk musician and songwriter. He performs solo and as the leader of the band Barnstormer. He describes himself as a “sharp tongued, high energy Club & Social Events surrealist poet and songwriter.” He has performed over 3,300 concerts, published seven books of poems and an autobiography, and released over forty recordings.

Tonight he was ably supported by local poet Nick Knibb. Nick’s poems were about life in Coventry, Two Tone, music and football - the things that count.

Attila’s set touched, informed and provoked us. Stories about his grandmother and his experience of cancer were thought provoking and a reminder of how we should all keep fighting for the NHS. He reminded us to never ever forget the assaults on the miners during the big strike of 1983 and why it’s still going on. He made us laugh with his songs including the crowd pleaser “Harry’s Knob”.

Following his visit, Attila wrote an article for The Morning Star telling of his week on the road. The Club got a mention and it seems he was impressed...

“.... it was down to Coventry for a pioneering gig at the Albany Club in Earlsdon. It used to be the Earlsdon Working Men’s Club, until modernity caught up with the name and now, thanks to Gill Dawson and her friends, modernity has caught up with — some of — the committee too. After years of covers bands, karaoke and all the normal fare, I was the guinea pig — a sometimes rude and very left-wing performance poet on a Wednesday night. Brave people put their reputations on the line in the face of the kind of “nothing must ever change” attitude sadly prevalent in some of those venues and I’m happy to say it worked and then some — there will be more such gigs. Afterwards, we had a long discussion about the fate of Coventry City FC, held to ransom by a hedge fund. The fans need to do what we did at Brighton and simply drive the scum out of their club.”

The club also raised £300 out of the £500 he collected that week for the Poem-A-Thon at the Komedia in aid of the Refugee Council.

A brilliant night and we will hopefully be welcoming him back to The Albany next year. Until then it has spurred us on to look for similar performers - watch this space!

We try our very best to make sure we bring you the very best entertainment we can find at competitive prices. Occasionally artistes can't make it at the last minute for all sorts of reasons which are out of our control, so please call us for confirmation of listings if you are travelling any distance before commencing your journey 024 7667 5375