You may see which bands are booked from this week and beyond - even next year! - on our digital calendar here. Please note that advertised listings may be subject to change at short notice so please check before travelling

Concert Room Friday 17th January 9:00pm. There is a private party in the Lounge 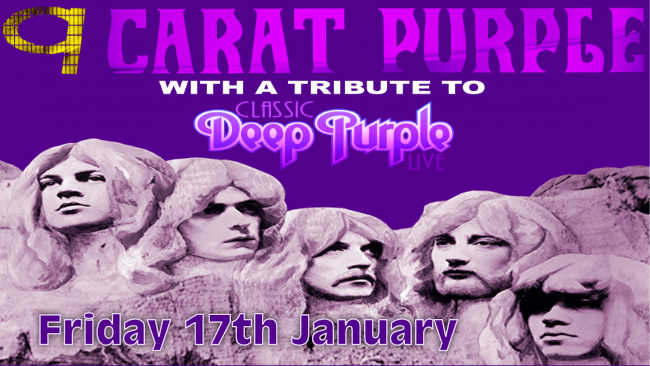 A Tribute to Seventies Deep Purple

With Ritchie Blackmore (Guitar), Jon Lord (Hammond Organ) and Ian Paice (Drums) driving them on relentlessly, Deep Purple were the best Rock Band that this Planet has ever seen. With their amazing standard of personal musicianship, their collective on-stage chemistry and their “Powerhouse” in-concert performances, no other band has come close to matching them as an all-round package.

During the period of time from July 1969 until April 1975, they were “box office sensations” who played more than 600 packed-out shows and sold millions upon millions of their records worldwide. In 1973 they were the highest selling music artists in the USA.

The quintessential Mark 2 line-up (which included Ian Gillan on vocals and Roger Glover on bass) and the subsequent Mark 3 line-up (with Glenn Hughes on bass and vocals and David Coverdale on lead vocals) forged the never-to-be-forgotten ”In Rock” to “Made In Europe” Era. With their mega-selling singles such as Black Night, Strange Kind Of Woman, Smoke On The Water and Woman From Tokyo and their album classics such as Speed King, Child In Time, Fireball, Fools, Highway Star, Lazy, Space Truckin', Burn, Mistreated and Stormbringer they radically changed the face of rock music in terms of composition and performance.

In the modern day, these five “Purple Obsessed Copyists” have dedicated themselves to reproducing Deep Purple songs from this amazing period of music history. Every time they get together to play (whether it’s in rehearsal or on-stage) they face an arduous challenge. They know only too well that they will never be as good as the real thing, which is why they call themselves merely … "9 Carat Purple". 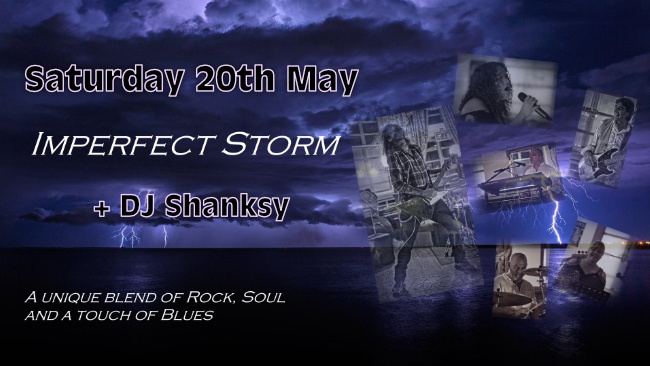 Imperfect Storm is a 6 piece band who have a collective background in UK and US rock, soul, tribute acts and blues and even a touch of metal in recent times.

They're set consists of rock and soul covers - from Tina Turner to Lady Gaga, The Foo Fighters to Stevie Wonder, Nina Simone, Beth Hart, Lisa Mann, Wilson Pickett to name but a few.

Up front are the soaring vocals of Miss Nyah Ifill, an incredibly talented young singer with great presence and a wow factor from the first note. Nyah fronting the band has support from accomplished musicians, Gaz Jones on guitar, Les Fortnam on drums, Les Greaves on Bass, Robin Fox on keys and Cathy Fox on backing vocals.

A great reaction and a great reception are the norm, so come and see for yourself and enjoy an evening with Imperfect Storm. 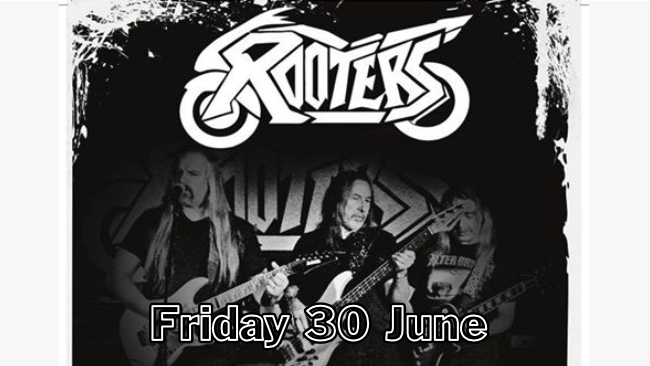 The Rooters having been classic rocking playing all over the country. We have a duel guitar attack with massive bass and drums to keep us rollicking along. 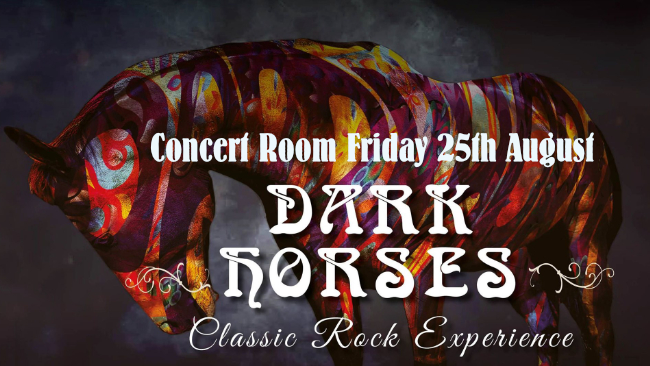 Dark Horses, purveyors of the finest classic rock and blues covers this side of the Sherbourne.

Dark Horses are five very experienced musicians, with thousand’s of gigging hours under their belts, who came together with the sole intention of breathing new life into these classic songs. David provides powerful main vocals - and authentic sounding guitar, bass, keys and drums from Sam, Andrej, Neil and Kurt complete the line-up providing the audience with a musical trip into a bygone era that’s just itching to spring back to life. 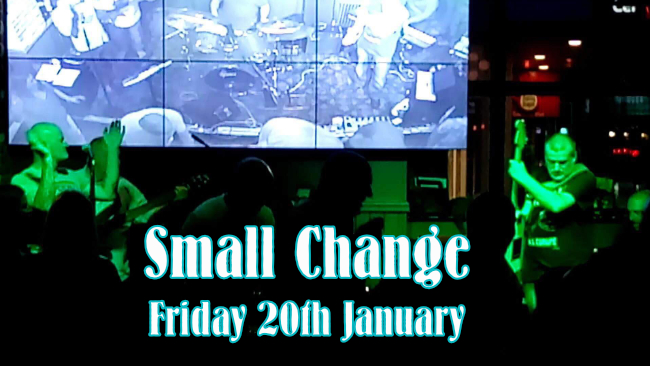 First time at the club! A five piece band playing a wide range of the best pop and rock anthems…..and a whole lot more besides! With an era defying setlist that is regularly updated, you can expect to hear your favourite pop, rock, soul, blues, country and whole lot besides from the 1960’s right up to the present day.

Five guys playing classic blues and rock from Howlin Wolf to Eric Clapton, John Mayall to ZZ Top, and classics from Bowie, The Rolling Stones, and Led Zep, to name but a few! Served up with a great sense of humour and some terrible jokes, we guarantee to totally rock your socks off!

The band have been going from strength to strength building a solid local fan base with regular gigs in Rugby, Coventry, Kenilworth and Warwick. Some fans come regularly from further afield, Banbury, London and even New Zealand just to hear them play! Recent successes include headlining the Hook Norton Beer Festival.

Entry is free for members and £2 for guests 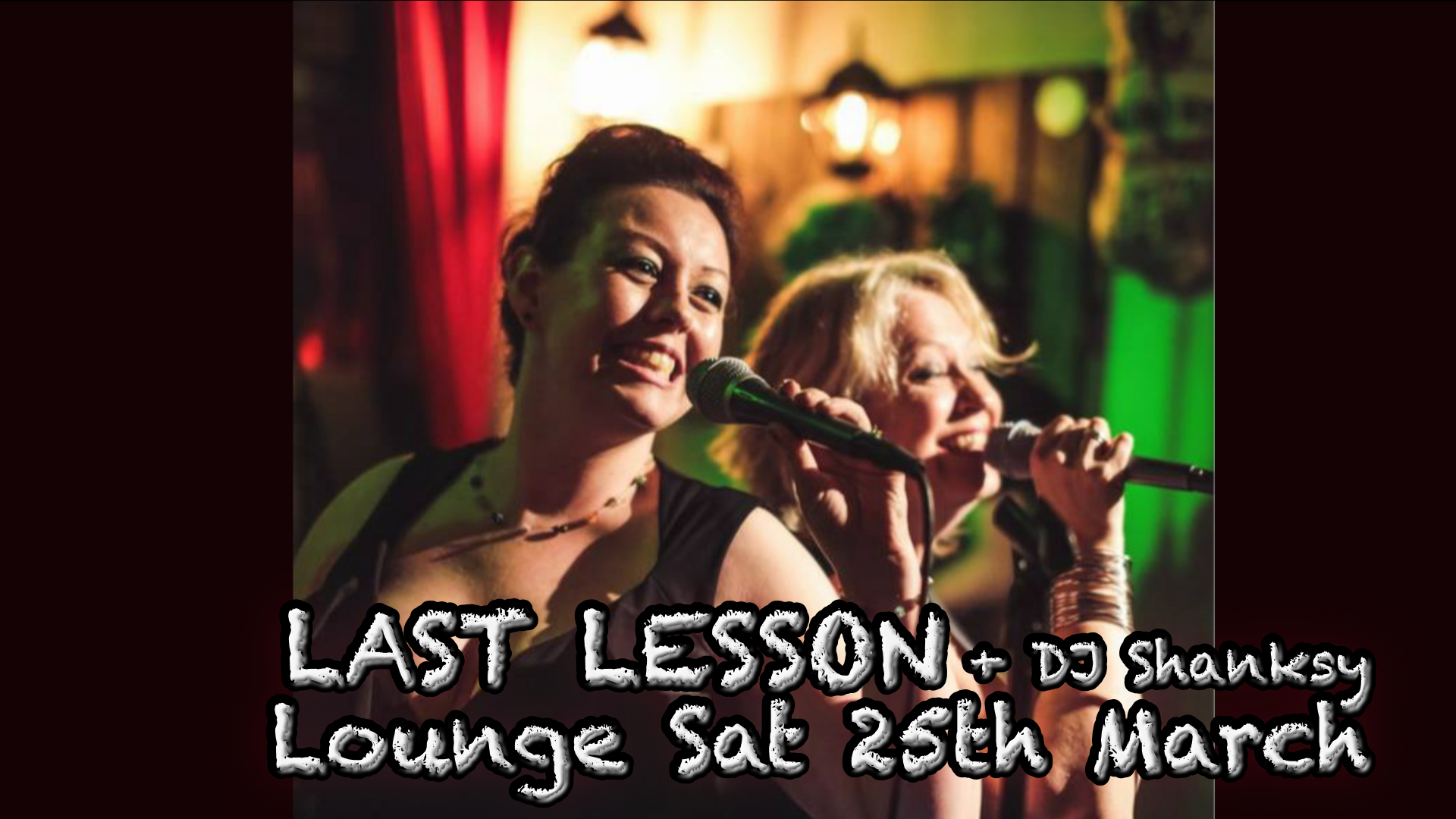 LAST LESSON are a 5 piece band based in Warwickshire, featuring twin vocalists, Ruth (who also plays guitar) and Amie (who also plays keyboards and sax). The rest of the band are Don (Guitar) Trev (Bass) and Andy (Drums) who all sing adding some close harmonies and detailed vocal arrangements that the band specialise on.

Formed in 2014 the band have many gigs under their belt, filling dance floors everywhere they go.

Covering music from Abba classics to modern day hits by Jessie J and Adele come and see us play and be taught your LAST LESSON!!!

You may see which bands are booked from this week and beyond - even next year! - on our digital calendar here.

We try our very best to make sure we bring you the very best live music we can find. Occasionally bands can't make it at the last minute for all sorts of reasons which are out of our control, so please call us for confirmation of listings if you are travelling any distance before commencing your journey 024 7667 5375